This year 2014 will see the 40th Anniversary of the modern day revival of dancing within the village of Adderbury, Oxfordshire. It would seem a good time to put the whole existence of the Tradition of Dancing – and particularly the role taken by women – into some sort of context, both historically and currently, and to fill in some gaps.

The history of the dancing in the village is very well documented by the major collectors of the tradition, Cecil Sharp and Janet Heatley Blunt, and by subsequent village-based teams. Overall, it is interesting to look at what has happened over the time since 1880, the date which seems to mark the end of dancing by the original traditional team. Because of the time in history, there was probably very little, if any, female influence on that 1880 team. Women’s place in society at that time was pretty domestic and they were largely dominated by a strict male orientated way of life. Women were still included with a man’s  “chattels”. By the turn of the 20th century things were changing, and some women, mainly from the higher classes, were beginning to have a greater say in how they led their lives.

In Morris Dance terms, 1908 is a very early date for any sort of revival of dance within the villages. There were still traditional teams dancing, notably Headington Quarry, Abingdon and Bampton, but very little was happening elsewhere. Cecil Sharp did not publish the first edition of his Morris Book Part 1 until 1907, and although he met the Headington Morris in 1899, he really didn’t start collecting seriously until 1906 after some prompting by Miss Mary Neal and her Esperance Dancers, to whom Sharp dedicated this first edition. In the annals of The Morris in Adderbury we first see interest in reviving the dance in the year 1908, at the celebration of Empire Day, and there are photos to prove this. A committee was formed in April of that year, and it was decided to include Morris and Country Dancing in the day’s events.

After much research and help from friends at The Adderbury History Association, particularly Barry Davis and the late Vera Wood, we can now say who taught that Empire Day boys’ team how to dance.

The following newspaper cutting is from the Banbury Guardian dated 28th May 1908.

This cutting shows that Morris was taught by Miss Frances Etrenne Hoskyns, who was one of the daughters of Sir and Mrs. Leigh Hoskyns of Cotefield House, which can still be found on the main road to Banbury between Adderbury and Bodicote. Miss Hoskyns was helped with teaching by Mr. & Mrs. Walker (school headmaster and wife). The Walkers taught Maypole dances to the boys and the girls, and I also believe the children were at the school and teaching happened during the school day. Frances Etrenne Hoskyns was 21 years old at the time, and I assume that she used Sharp’s 1907 Morris Book as her only reference. I also believe that this is where details of the boys’ kit was also found and it also provides the reason for the inclusion of the Hobby Horse. I have asked the Library at the head quarters of The EFDSS if they have any early records of Miss Hoskyns and The Walkers, and they have none – even in old members lists.

It transpires that some of the boys taught by Miss Hoskyns went to war in 1914; they did not return, with the exception of Charlie Coleman. This story is featured in Tim Plester’s wonderful film The Way of The Morris. 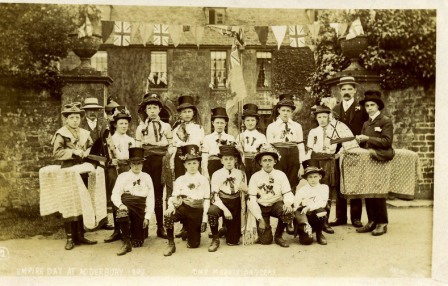 Mr. Walker, the Headmaster, is in white boater hat next to the Hobby Horse on the right side of photo. Charlie Coleman is front second on right.

We are not really sure when collector Janet Heatley Blunt first took an interest in the village traditions. 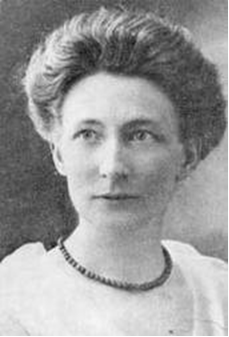 Born 1859 in India, she moved to Le Halle Place, Adderbury with her father in 1896. He died in 1900, and from that time until her death in 1950 she took on the role of Lady of The Manor. From her manuscripts we can see she started collecting songs as early as 1907, but she did not start collecting Morris dances until 1914. In 1913 she was certainly involved with the next phase of village dancing, when she helped arrange for the teaching of Morris to boys and social dance to the boys and girls of the village. Searches of the Parish Magazine on my behalf by the late Vera Wood, show that this teaching actually began in February 1913. The teaching at that time was actually undertaken by Miss Daisy Caroline Daking of TheOxford School of Folk Dancing, founded by Cecil Sharp.

Adderbury Parish Magazine – Feb. 1913 written by the Rev, Gepp – A revival of the old English national and country dances is taking place in many parts of England, thanks to Mr. Cecil Sharp, who has sought with un-wearied enthusiasm to recover not only our almost forgotten treasures of traditional songs, but also the ancient Morris dances, and other dance steps and tunes, from the memories of those who could still recall them, and also from an old manual of English Country Dancing, called “Playford’s Dancing Master,” published three or four centuries ago. Adderbury has now a chance to learn these gay and delightful dances, for Mrs. Gepp, assisted by Miss Blunt, has arranged for a course of lessons in various dances to be given by Miss Daking, from the Oxford School of Folk Dancing, founded by Mr. Cecil Sharp. Women and girls 4.0 pm to 5.0pm and 5.30pm. – 6.30pm. 2 shillings for the course. For Men and lads, from 8.0pm – 9.0pm. 2 shillings for the same class. The men will learn, besides Morris, some of the ancient “Sword Dances” from the North of England, and also some of the Country Dances, in which the women’s class will occasionally join.

In a letter dated 28th February 1913 sent to Clive Carey, Miss Blunt talks about the onset of the classes in the village. –  “My other old acquaintance here, an old man named James Locke (who used to Morris Dance) & who gave me the verse of a song, words only, & also hummed a bit of Morris tune, has never been able or inclined to tell me any Morris – There were several Morris dancers in this village – but only one or two who survive. A dear old man from Bledington who has been staying near here with a daughter, showed 2 Morris Jigs last week to our Boys Morris class (under Miss Daking). He danced The Princess Royal and Bacca Pipes Jig, both of which Mr. Sharp had noted down from him some years ago, when his agility was a little more equal to his memory and enthusiasm than it is now, for he (Mr. Gibbs) has been very ill since Xmas; and I really feared the effort would be too much for him. He is quite deaf, so danced without music – and in excellent time.”

Regarding these 1913 classes in Morris, at that time it was the policy of the English Dance Society, formed in 1911, to teach Morris in levels; they would teach Headington first and only progress to more difficult dances later.

It would seem that Miss Blunt did not know William Walton, the last leader of the Traditional village team, until 1914 at the earliest. If she knew Walton at the time of her letter to Carey shown above, I am sure she would have mentioned him there. We do know that Blunt started to collect songs and dances from Walton during 1914, and continued to do so until 1919. She was also responsible for introducing Walton to Cecil Sharp, and arranging for Walton to meet Sharp in Hampstead Heath in 1919. It was at those meetings (also with Maude Karples) that Sharp collected from Walton and later published The Adderbury Dances in his Morris Book Part 2 in 1919. Walton died aged 83 in 1919 not long after meeting Sharp. As stated earlier, Janet Blunt collected the dances from Adderbury over a number of years, but first, in 1914, she started collecting dances from Mr. Fred Webb who was living in the neighbouring village of Bloxham, but he was actually an old dancer at Longborough. When actually collecting in Adderbury from Walton during those earlier years, Blunt did get the assistance of several friends from the Oxford area, including Miss Phyllis Marshall, Miss Daking and Mrs. May Elliott Hobbs. There is also a minor reference to “Miss Kennedy”, and I am not sure who that was.

There is a very good article about Phyllis Marshall written by Geoff Woolfe available on the Musical Tradition web site at http://www.mustrad.org.uk/articles/phyllism.htm
There is also included in this a small piece about Daisy Daking and her involvement. Without the efforts of Miss Blunt and her cohorts, there would be very little information about the village song and dance traditions, and we should all be grateful for their contributions.

However, if it were not for the efforts of another woman after Miss Blunt’s death in 1950, even this contribution would have been lost. Winnie Wyatt and her husband Fred worked for Miss Blunt for many years, and when Winnie saw that the Blunt family did not understand the importance of her written collection, she persuaded them not to throw it all on the fire, but have it sent to the EFDSS, where it remained largely ignored until the 1970’s. In 1974 the revival team, of which I was a member, used Blunt’s manuscripts, along with Sharp’s original information held at Clare College, Cambridge, to re-create the dances from the village. 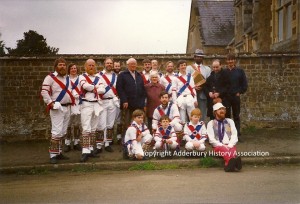 Winnie and Fred Wyatt in the centre

Bryan Sheppard and I, when we started deciding what to do in each dance, could not read music (Bryan could play Recorder), and in those early days of the revival the task of learning the tunes in the manuscripts fell on my first wife Annie Radford (English Concertina), who subsequently taught the tunes to the other musicians and played for the team in the first year.

One of the reasons that the team split into The Adderbury Morris Men (AMM) and Adderbury Village Morris Men (AVMM) in late 1975 was the question of having female musicians on the team. At the first AGM, because Annie was phasing herself out of playing and Sheena Powell (Fiddle) was thinking about taking her place, Bryan tabled a motion that the team should not have female musicians. This motion was defeated; AMM has continued to have female musicians as part of the group, and so it continues today. The AVMM have gone their own way. There was also a long period when Verna Wass was the Bagman of AMM, and she still is involved today as one of the team musicians (Fiddle).

The latest female phenomenon in the village is the emergence of “Sharp and Blunt,” a team of female dancers. This team has added significantly to the village dancing, bringing a renewed enthusiasm and another dimension to the rich heritage of the village. 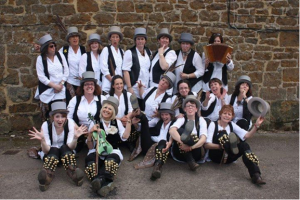 This team are all local with some members being wives of The AMM, and they dance their own versions of the village dances originally taught them by members of AMM, plus some of their own making in the style. One of their musicians is the former, but still occasional, AMM musician Sheena Powell Mccormack  (second in front left).

Long may Adderbury be a centre for all things Morris, where women as well as men can find a place among its three vibrant teams and continue the tradition.