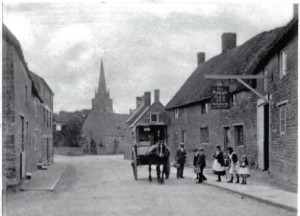 The High Street in the early 1900s

Adderbury’s recorded history begins more than 1,000 years ago whilst its origins go even further back with two Roman sites within the parish. The name Adderbury is derived from that of Eadburgesbyrig first mentioned in a Saxon Will circa 990-995. The ancient parish of Adderbury included the townships of Adderbury East, Adderbury West, Bodicote, Barford St John and Milton. In 1855 Bodicote became a separate ecclesiastical and civil parish and in 1932 Barford St John was joined with Barford St Michael to form a new civil parish. The modern civil parish of Adderbury East and West with Milton covers 4,028 acres. Until the 1970s East and West Adderbury were each administered by their own parish councils.

The parish was administered through the Manorial Court and a variety of posts such as the Overseer, Hayward and Constable. There was a Pest House and Pound. The Fire Brigade was jointly administered in the late 19th and 20th century by both parish councils. Benefit clubs were set up to support the working families and the Adderbury Feoffee charity gave help to those in need as it still does today.

The majority of the village buildings are made from the local ironstone which, with its iron ore content, provides a warm, honey coloured stone. Two of the oldest surviving buildings are the parish church of St Mary the Virgin which dates back to the 13th century, although there was an earlier church on the site, and the Tithe Barn which probably dates from the 15th century.

Adderbury is situated in a prime rural and agricultural area and this led to a significant agricultural expansion during the late 16th and the whole of 17th century primarily driven by the development of the local wool trade. This also led to additional trades such as plush weaving. During the mid 19th to early 20th century much of the land to the east and south of the village was surface mined for iron ore. This industry benefitted first from the Oxford Union Canal passing along Adderbury’s eastern boundary and then the arrival of the railway in 1887. 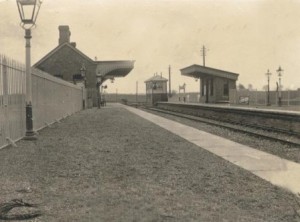 The station in the early 1900s

Later industry included Banbury Buildings situated where Banbury Business Park is today and Twyford Seeds owned by Bibbys to the south of the station. Today there is Ball Colegraves Seeds on the Milton Road and a variety of businesses on what was the Twyford Seeds and the railway station sites.

Transport links have always been good with the village situated on the main road leading north to Banbury and the Midlands, south to Oxford and the south coast and east towards Aylesbury and London. More recently the extension of the M40 has provided quicker connections to the north and south of England. 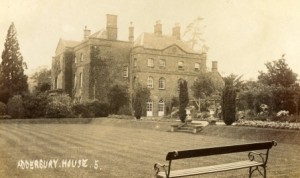 Adderbury House from the front

The village has an unusually large number of big houses. In the East, Adderbury House, the former home of the Wilmots and Buccleuchs and the Rookery which was previously home to the Bradford family and later Lord Elton. The Lord of the Manor title is still in the Elton family but they no longer reside in Adderbury. The Grange is situated to the east of the churchyard, the Old Vicarage to the south of the church lych gates. The Manor House with its Tudor chimneys lies to the south of the church in Mill Lane. This was home to Sir Miles and Lady Thomas during WWII.

In the West is Crosshill House on the corner of Horn Hill Road and Manor Road.
Le Halle Place in Manor Road was, from the 1870s until the 1950s, named The Manor but was never a manor house. During the period that it was called the Manor House two influential families lived there. They were those of Lady Charles Paulet from c1870- c1894 and the Blunt family c1884-1950. Janet Blunt was instrumental in collecting songs and dances that had been performed in Adderbury throughout the 19th and early 20th century. Little Manor, also on the corner of Horn Hill Road, and Manor Road was the home of Bray Doyley a non-conformist who paid to have the Quaker Meeting House built on his land in 1675.

Adderbury has always been a home to non-conformists and this led to tension over the various centuries. During the Civil War Wilmot at Adderbury House and the vicar were staunch Royalists whilst the majority of the ordinary folk were non-conformist or Parliamentarians. This led to the death of the vicar by Parliamentary soldiers in 1645.
Schooling has also played an important role in the village. The earliest school was the Boys Grammar School opened in 1599. In the 19th century Sunday schools and later day schools for the infants and girls were opened

For recreation the inhabitants of Adderbury have enjoyed socialising in the village public houses; bell ringing goes back to at least the 17th century. There was also Cricket Week and the annual Flower Show as well as a whole host of clubs and societies. Some of these such as the WI, Scouts, British Legion, etc still flourish. 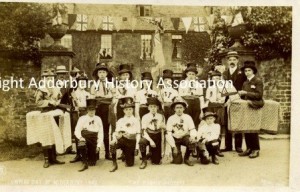 1908 – School children who had been taught Morris dances by Miss Hoskyns.

The village has a long tradition of Morris Dancing. It died out after the death of four of the team in WWI. However the memory of Charlie Coleman who was the last surviving member of the pre war team enabled its revivaI in the 1970s, together with the tunes and songs recorded by Janet Blunt whose manuscripts are held at Cecil Sharp House in London.