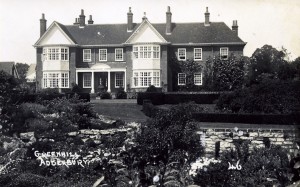 The present day Greenhill complex stands on the former site of Greenhill House which later became the Leonard Cheshire Care Home. Greenhill House was built in 1906 for Lewis Stone the son of Henry Stone. Henry Stone was a bookseller who founded the firm Henry Stone & Son in 1871. They started to manufacture a patent letter-filing box and the business developed into general cabinet-making and cardboard-box manufacture, then into high-grade colour printing, and finally into fine-art reproduction. The expansion of the firm was mainly due Lewis Stone who took over its management about 1882; a factory at Gatteridge Street, for the cabinet-making, was opened in 1883 and one at Swan Close, for the printing, before 1915 (now the site of Morrison’s Supermarket). The firm became a limited company named Henry Stone & Son Ltd., and operated both branches of the business until the last quarter of the 20th century. Lewis, who was also a J. P., and his family moved into the Greenhills Estate either in 1906 or early 1907 when Greenhills was the only house in Twyford. More houses started to be built on the east side of the main road from about 1911. The family employed a live in housekeeper/cook, parlour maid, housemaid, kitchen maid and gardener. About 1912 the Stone family moved from Greenhill. In 1912 Lady Elizabeth and Lady Evelyn Parker moved into the house. Lady Elizabeth died in January 1916. Greenhill House was one of the few houses in the village with electricity in the early 20th Century. In March 1917 Lady Evelyn Parker successfully appealed against her gardener Arthur Ottaway being conscripted on the grounds that he was the only person able to fix the engine for her electric plant which supplied heat and light.

From 1920 until 1924 Col. Walter Thornton J. P. lived in the house. He was followed by Joseph Blacklock and his wife. In 1926 the Blacklocks entertained the recently formed Adderbury British Legion members to a meal to celebrate their Golden Wedding. Mrs Blacklock also held some of the WI meetings at Greenhill. In 1933 the Blacklocks moved out. From 1935 until 1937 a Mrs Darley resided at Greenhill and then in 1937 Leonard Lord bought the house. He was the Managing Director of Morris Motors and then, shortly after moving in, became Works Manager of the Austin Motor Company. In July 1939 just before the outbreak of WWII he put the house up for sale but before he could sell it the Oxford and Bucks Regiment requisitioned it by apparently putting pressure on him to let them have it. It is believed that Mr Lord went as far as trying to bribe Lt. Col. Long to go elsewhere. During the war period Nissan huts were erected in the grounds of the house and various regiments were billeted there. These included the Oxford and Bucks Light Infantry, the Irish Battalion of the Kings Regiment etc. At some point either just before or just after the war had ended Mr. J (Jimmy) Black J.P. bought the house. In 1950 he allowed the vicar of Adderbury to have one of the Nissan huts to use as a church because it was felt that it was a long way for Twyford parishioners to walk to church in Adderbury village. During the 1950s and 60s the grounds of the house were used for village fetes organised by the church and the British Legion. About 1967 the Black family moved into a new modern house in Manor Road Adderbury. Jimmy Black died in 1976 and during the period 1974 -1977 there was an attempt to convert the Church House in Banbury’s Horsefair into a theatre to be known as the Jimmy Black theatre. Unfortunately despite a large fund raising drive the project was never completed. After the Blacks left Greenhill House, which already had a lift installed for Mr Black, the building was converted and extended into a Leonard Cheshire Care Home. The first residents moved in in February 1969 and the Home was officially opened on May 3rd 1969 by Leonard Cheshire. The first resident at the home was there for seven years before he sadly died. The ties with Adderbury village continued and fetes were regularly held to raise money for the Home and these were supported by villagers including the Adderbury Morris men who danced at some of the fetes. In 2007 the residents of the Cheshire Home moved into new accommodation at Agnes Court in Banbury. This gave them a modern purpose built home and easier access to the town etc. and the Greenhill House site was sold and then transformed into the present day accommodation. 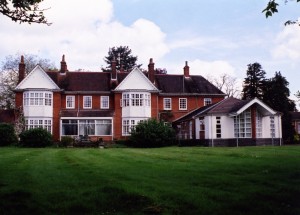