At the end of WWI there was a housing crisis for the returning soldiers and their families and at the end of 1918 the Banbury Rural District Council attempted to devise a housing scheme to meet this need. Potential sites were inspected in a number of villages including Adderbury. The numbers needed at surrounding villages other than at Adderbury were not as many as first thought and it was decided to build 20 new council houses on a 5 acre site adjoining Twyford Gardens. In the event just 12 houses were built in The Crescent just off the Banbury Road and were ready for occupation in the autumn of 1922. 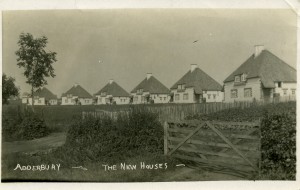 The setting was described as on an elevated position away from the road and its dust and with splendid views to the west. At the time the new houses were described as of the parlour type with each house planned so that the scullery became part of the kitchen, with a neat little arrangement in the corner nearest the window containing a sink, plate rack and dresser with cupboards above and below. Beside the living room and parlour there was a convenient larder, a separate washhouse, an inside wc and a large space under the stairs.

Upstairs there were three bedrooms, one with a wardrobe let into the wall, another with triangular dressing table fitted into one corner, whilst the third bedroom in compliance with the usual habit of keeping apples in there to ripen had an apple loft in the upper part of one of the walls.

The entrance doors were painted blue with a yellow frame and there was an outside porch and small verandah.