The Twyford Tea Gardens (house and grounds) were developed as part of the Twyford Garden Estate. This was an attempt to develop a rural Garden Suburb outside Banbury. The Garden Suburbs and Cities movement became popular in the early 20th century and the wording Twyford Garden City is used in one of the local newspapers of that period.

Greenhill House, built in 1906, was the first house in Twyford. It was built for Lewis Stone, son of Henry Stone, founder of the Banbury firm Stone & Sons. This house was on the site of the present Greenhills Court. About 1910 work started to build houses on the eastern side of the main Banbury to Oxford Road and along the Kings Sutton Road. This building development included what was known as The Twyford Tea Gardens now known as Morgan’s Orchard.

The Tea Gardens was probably opened in late 1912 or early 1913. There was a refreshment room able to accommodate large groups and a newspaper report of 1926 says that a group of 68 travelling back to Banbury in char-a-bancs stopped for afternoon tea. Afternoon tea was also popular with people walking out from Banbury. At the front of the building was a shop which sold a range of kitchen and household goods. 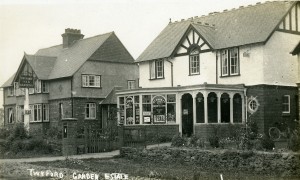 A post box was located at the front of the premises and emptied three times a day during the week. After WW2 a post office counter was added to the shop. Tea was also served in the Summer House and on the lawns at the rear of the building which included a tennis court. Accommodation was available to rent and a number of people who worked in the village rented rooms. 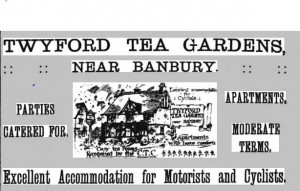 An advert from the Banbury Advertiser for May 1913

The advertisements in the local papers also offered rooms for the night for passing motorists and cyclists. The Cyclist Touring Club recommended The Tea Gardens as a place to stay and motorists were offered garaging facilities. In 1924 permission was granted by the Rural District Council to extend the building.

Miss Sarah Lane (later Mrs Sarah Moreby) ran the Tea Gardens until WW2 but by 1950 Miss Lizzie Pollard had taken over the premises and was running it as a shop and rented rooms. When Lizzie retired the Plesters, who ran the village newspaper delivery business, moved in. The shop was eventually changed into a hairdressers and run by their son Bill. When the Plesters sold the Tea Gardens it was bought by John and Margaret Waite. They. as a family, ran it as a tea room and successful guest house. At the time of the completion of the M40 motorway the Waites sold the premises to the Morgans and the tea room etc. was converted into a restaurant and living accommodation known as Morgan’s Orchard.